The Mitre of the Papal Coat of Arms 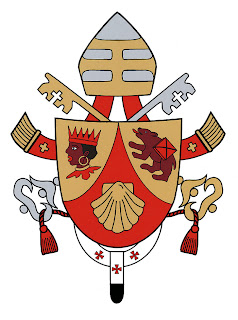 On the coat of arms of His Holiness Pope Benedict XVI. the tiara was replaced by a mitre with 3 stripes.

About the mitre in the coat of arms (Source: Coat of Arms of His Holiness Benedict VI.):

"The Supreme Pontiff's arms have featured a "tiara" since ancient times. At the beginning this was a sort of closed "tocque". In 1130 a crown was added, symbol of the Church's sovereignty over the States.
Boniface VIII, in 1301, added a second crown, at the time of the confrontation with Philip the Fair, King of France, to show that his spiritual authority was superior to any civic authority.

It was Benedict XII in 1342 who added a third crown to symbolize the Pope's moral authority over all secular monarchs, and reaffirmed the possession of Avignon.

With time, although it lost its temporal meaning, the silver tiara with three gold crowns came to represent the three powers of the Supreme Pontiff: Sacred Orders, Jurisdiction and Magisterium.

In past centuries, Popes wore the tiara at solemn official celebrations and especially on the day of the "coronation" at the beginning of their Pontificate. Paul VI used for this purpose a precious tiara which the Archdiocese of Milan had presented to him, just as it had given one to Pius XI; but afterwards, Paul VI donated it to a charity and introduced the current use of a simple "mitre", although these mitres were sometimes embellished with ornaments or gems. But he left the "tiara" and the crossed keys as the emblem of the Apostolic See.

Today, the ceremony that begins a Pontificate is no longer called a "coronation". The Pope's full jurisdiction begins the moment he accepts his election by the Cardinals in the Conclave and not with coronation as for secular monarchs. This ceremony, therefore, is simply called the solemn inauguration of his Petrine Ministry, as it was for Benedict XVI on 24 April.

The Holy Father Benedict XVI decided not to include the tiara in his official personal coat of arms. He replaced it with a simple mitre which is not, therefore, surmounted by a small globe and cross as was the tiara.

The Papal mitre shown in his arms, to recall the symbolism of the tiara, is silver and bears three bands of gold (the three powers: Orders, Jurisdiction and Magisterium), joined at the centre to show their unity in the same person."


After my knowledge, at this time there exists only one real mitre made exactly according to the mitre of the coat of arms of
H.H. Pope Benedict XVI.: 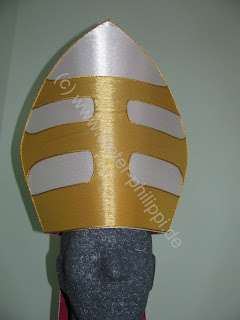 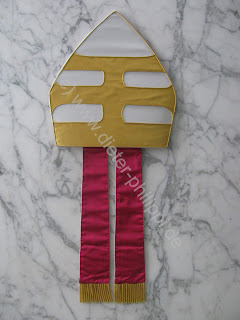 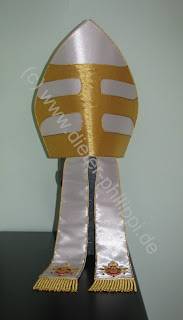 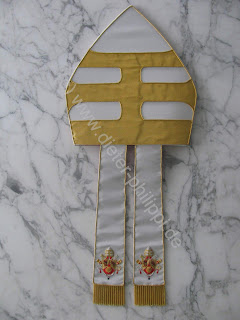 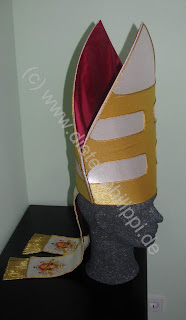 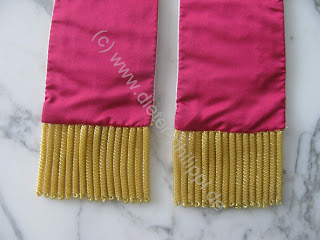 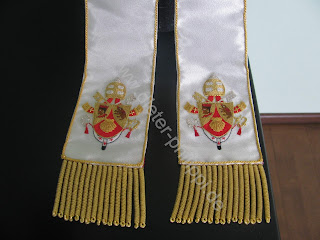 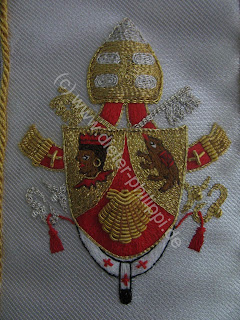 You can read some critical comments from the point of correct heraldry about the mitre used in the new coat of arms of the Holy Father from Mr Maurizio Bettoja, member of the Società Italiana di Studi Araldici (S.I.S.A.) (unfortunately only in Italian language):

In the above articles the mitre is described as "mitria zebrata" (for the mitre is looking similar to the tripes on the skin of a zebra).

In his letter to the editor of the German newspaper Die Tagespost dated 24th of May 2005, page 16, Mr Stephan Uano discribes this mitre as "Mitriara" (new creation of the words "mitre" and "tiara").
um 9:12 PM