[N.B. This is no extensive and complete disquisition on the head coverings of the bishops of the Assyrian Church of the East. It is merely intended to provide students and interested readers with a starting point before taking their studies to a more profound level. The links mentioned as source of the pictures are from 2007. Unfortunately a few of them are no more connected.] 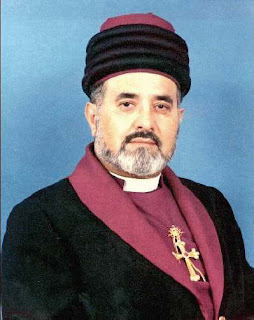 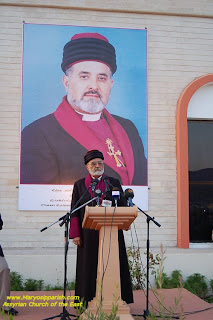 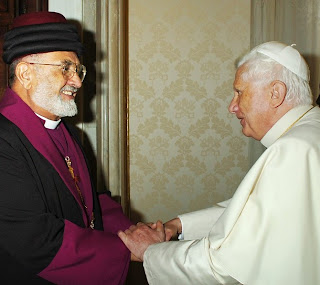 Image 2
His Holiness Mar Dinkha IV Khanania
Catholicos-Patriarch of the Holy Apostolic Catholic Church of the East (New Calendarists)
together with H. H. Pope Benedict XVI on 21st of June 2007 at the Vatican
wearing a dark red (burgandy) Kossita with 3 rings
© http://cache.daylife.com/imageserve/02KN7Bbdzlajz/610x.jpg 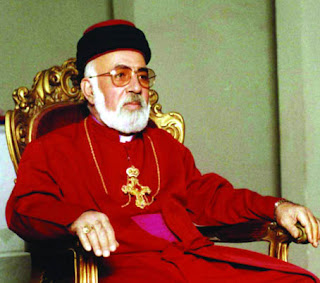 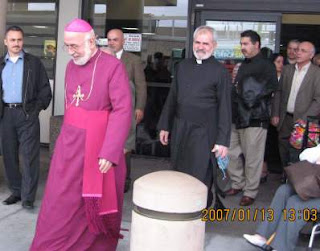 Image 4
His Holiness Mar Addai II Shleemon Gheevargese
Catholicos and Patriarch of the old Church of the East (Old Calendarists)
at a visit to Northern America in January 2007,
wearing a cassock and a zucchetto quite similar to those worn by the Catholic bishops
© http://www.ankawa.com/forum/index.php/topic,72970.0.html 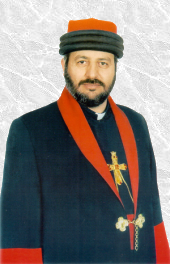 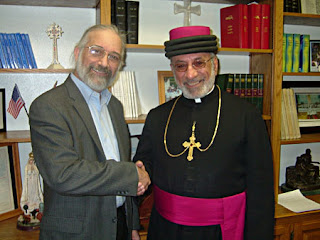 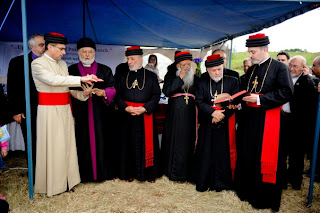 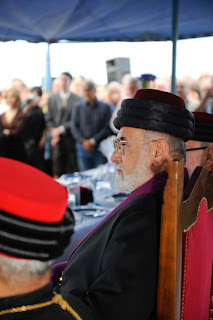 Image 7
Sunday 14th of December 2008
H. H. Mar Dinkha IV, Catholicos-Patriarch of the Church of the East, in the company of prelates from several dioceses, laying the foundation stone for Ss Peter and Paul Parish at Kosovich Place, Cecil Park (Western suburb of Sydney)
© http://www.assyrianchurchnews.com/News/view/NewsID/46 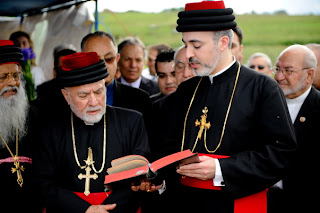 Image 8
The prelate on the right wears a bright red Kossita with 3 rings and a sheaf of black string which is tied to the rear at the top of the hat.
© http://www.assyrianchurchnews.com/News/view/NewsID/46 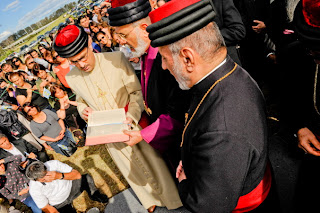 Image 9
The prelate on the left wears a bright red Kossita with 3 rings. The cloth was plied at its top. At its centre, there is a button.
© http://www.assyrianchurchnews.com/News/view/NewsID/46 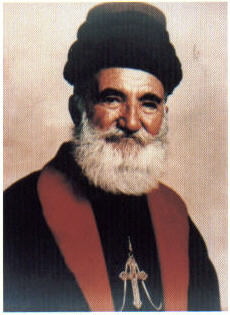 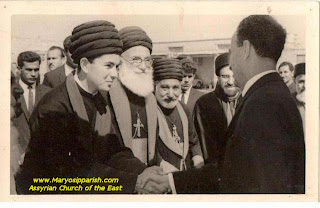 Image 10
Mar Yosip Khnanisho X. (* 1893; † 3rd of July 1977 at Bagdad) was a Metropolitan bishop and a patriarchal administrator of the Assyrian Church of the East.
© http://www.betnahrain.net/Biographies/MarYosip.jpg 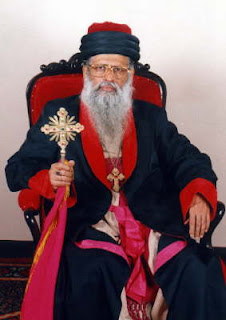 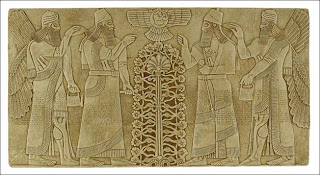 Image 12
Relief from the North-Western palace at Nimrud  (865 B.C.)
King Ashurnasirpal looking at the tree of life with 2 deities by his side.
British Museum, London.

Image 13
Holy tree
Assyrian tree of life
Inside the green marks, there are 3 rings which are fairly similar to those of the Kossita. 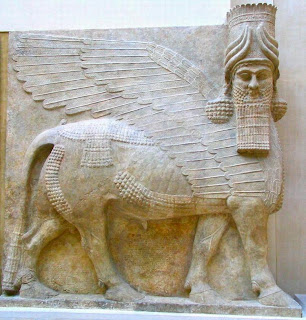 Image 13
Lamassu
Lamassu, a mythical creature frequently depicted in recent Assyrian art. Its body is that of a bull or lion; its head is that of a bearded man with fez-like polos. The tight-fitting ornaments, extending to the front and to the top are interpreted as horns (horn polos). The bull-like Lamassus found in the palace of Assumasirpal II at Kalach (Nimrud) are most commonly known (British Museum). Usually, these mythical creatures were carved in stone and erected at the sides of large gates, e.g. at those of temples.
© http://www.beyars.com/kunstlexikon/lexikon_5319.html 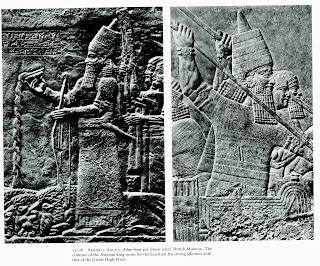 Both words designate a „hat“. The headcovering consists of two parts:

(1)   A round cylindrical „Tarboosh (Fez)“, clad in bright red (cardinal), dark red (wine red) or violet fabric, at the centre

(2)   Tubes of cloth filled with cotton wool. These tubes are wrapped around the Tarboosh (Fez). They are fixed at the back with a noose. The noose covers the stitching of the tubes.

At the top, the cover of fabric is either flat or plied with a small button at the centre. At the back, there is a lace (approx. 4 cm wide) intended to cover the stitching of the tubes and fix their position. Very few Kossitas have a sheaf of black strings from the upper centre to the brim, like the Fez. This bunch of string is fixed beneath the tubes.

The 3 rings are supposed to represent the trinity (of the Father, the Son and the Holy Spirit). These 3 rings can be found in depictions of the Assyrian tree of life and the headcovering of the Lamassu, too.

„The audience was astonished when Dr. George explained carved horn shaped circles on the headgear of ancient Assyrian Guardian (Lamasu) monument. The circles were the symbol of Divinity which are almost identical to today’s headgears worn only by the Assyrian Bishops and Patriarch. At that very moment, 200 set of eyes rested on the headgear worn by His Grace Mar Sargis Yousip, bishop of the Assyrian Church of the East sitting in the front row.“
(source: http://www.assyriatimes.com/engine/modules/news/article.php?storyid=3351)

The red colour is supposed to commemorate the martyrdom which shaped the Assyrian church and the nation.

Allegedly, the colour violet was turned into dark red when Kurdish sheiks started to wear violet clothes, too. From then on, the bishops of the Assyrian church decided to wear dark red.

Concerning the 4 rings of H. H. Mar Dinkha, I was given the following possible explanations on my request:

(1)   The foster-father of H. H. Mar Dinkha, Mar Yosip Khnanisho (1893-1977), a metropolitan bishop and representative of the Catholicos-Patriarch in Iraq, who raised Mar Dinkha from the age of 11 used to wear a Kossita with 4 rings as well. Hence, the 4 rings are supposed to commemorate his spiritual mentor.

(2)   The 4 rings symbolize the fact that H. H. Mar Dinkha IV is the 4th Mar Dinkha, if one takes into account the sequence of 120 patriarchs that have been in power ever since the Assyrian Church of the East was founded.

Conclusion:
The exact shape of the Kossita is not uniform or standardised. Depending on who wears it/ which tailor manufactured it the Kossita can differ in shape and making. The colour, too, may be chosen freely by the prelate supposed to wear it.

So far, I have not been able to find out why H. H. Mar Addai II has not worn a Kossita, but a Pileolus lately. His intention might be to distinguish himself from the New Calendarists, though.

Images with several models and styles: 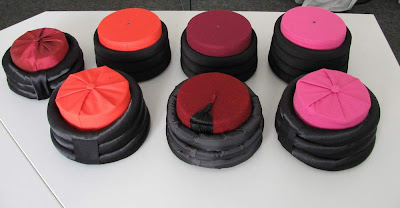 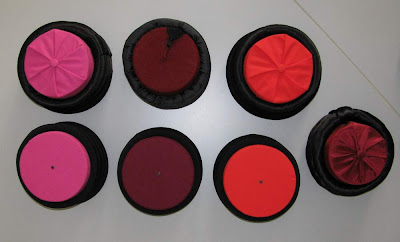